The motivation for what now has become globalEDGE was conceptualized by Dr. Tunga Kiyak in 1993. Our main motivation, then as now, was to provide a human intelligence-based and expert-driven categorization of international business resources. Our team sorts through thousands of sites attaching descriptions of the contents of the most valuable sites, and categorizing them into simple, yet meaningful categories.

The idea for the World Wide Web was publicly launched on August 6, 1991, by Tim Berners-Lee. A few years later, information on the WWW had become overwhelming. The motivation for what now has become globalEDGE — the International Business Resources on the WWW (IBR) — was conceptualized by Dr. Tunga Kiyak in 1993. Dr. Kiyak, then a graduate assistant in MSU-CIBER, was also instrumental in launching the IBR in 1994 under the leadership of Professor S. Tamer Cavusgil. From its launch to its major redesign in 2001, the site had built up a following of 300,000 hits and 50,000 page views per month by the end of 2000.

In the early era of the Internet for the mass public market, doing research on the World Wide Web involved a combination of patience and creativity. Unfortunately, no standardized way existed to catalogue resources effectively (as exist in libraries). Back then (and to some degree now as well), searching by keywords was often a painful and frustrating experience since the technology of search engines could not evaluate the context that a word appeared in (e.g., the keyword bill could mean dollar bill , the Bill of Rights, or then President Bill Clinton). As a result, you were unlikely to find the resources that closely matched your specific needs.

Recognizing this basic problem, MSU-CIBER decided to assist individuals that were looking for international business information by organizing relevant information into a more meaningful and accessible form – and the "International Business Resources on the WWW" was born. Our main motivation, then as now, was to provide a human intelligence-based and expert-driven categorization of international business resources. Our team sorts through thousands of sites, filtering out ones that do not provide a value-added, attaching descriptions of the contents of the sites, and categorizing them into simple, yet meaningful categories. The combination of rigorous people-based evaluation of each site prior to inclusion on globalEDGE and highly targeted descriptions, we think, sets us a part from the larger search engines. 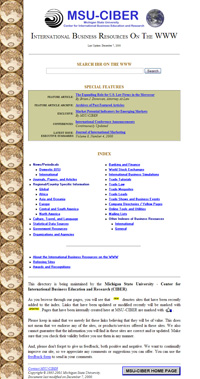 When traffic started coming, we went into a branding mode! Realizing that the one-page categorization structure of the online resources on the corporate site of MSU-CIBER had become a major tool for a variety of people, we launched globalEDGE as a separate entity in May 2001. The IBR was renamed the "Resource Desk" and constituted one of six major menu sections on the globalEDGE site when it launched in May 2001. Additionally, sections on Community, Knowledge Room, Academy, and Diagnostic Tools were added to target a variety of market segments more directly (e.g., business executives, public policy makers, scholars, and students). These sections still exist today, albeit some in different incarnations and names.

With a focus on the world map, globalEDGE symbolized the idea of providing world-leading "global knowledge." The slogan of "Your Source for Global Business Knowledge" became globalEDGE motto. This motto also served as the motivation for the branding of the site as globalEDGE. The word global was combined with the latter part of knowledge to form globalEDGE. In a creative meeting involving the MSU-CIBER team, Professor S. Tamer Cavusgil said: "I have it – global…edge, with edge taken from knowledge since combining them would be too long." Everyone agreed. Since its inception, the site has been structured largely the same, with a basic look and elaborate menu system.

During the 2001 to 2006 period, the site grew from about 300,000 hits and 50,000 page views to 3.8 million hits and 700,000 page views per month. The globalEDGE team grew from a few students and staff to more than 20 dedicated people (faculty, staff, and student assistants) under the leadership of Professor Tomas Hult. All major search engines consistently ranked globalEDGE the #1 site in the world when searching on the term "international business." 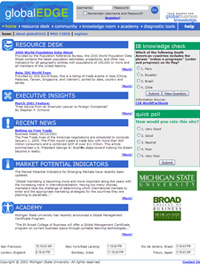 Having reached "maturity" in Internet years, the latest (2007) version of the globalEDGE logo symbolizes "global connectivity." The new site is intended to be professionally colorful, integrative, and user-friendly. This latest version of globalEDGE has added a number of different sections and features, as well as expanded on familiar resources. The Resource Desk, globalEDGE’s original section, continues to be a dynamic, ever-expanding portal of international business information. The Academy section now includes the globalEDGE-developed Online Course Modules, interactive educational tools for use in the classroom or executive training. Country Insights, one of globalEDGE’s most popular sections, has been expanded to include executive memos.

In addition to continually improving and adding to its existing features, globalEDGE strives to innovate and add new resources to its site. Due to the great success of the Country section, State Insights was created to highlight the various economic and international business aspects of the different U.S. states. In the same vein as Country Insights, the new Industry Profiles provides a wealth of information on nearly two dozen business sectors. The recent addition of the International Business Blog (replacing the News & Views section) highlights globalEDGE’s commitment to perpetual improvement and its dedication to the field of international business. Finally, the addition of a Database of International Statistics (DIBS) and the globalEDGE Business Review (gBR) help to secure gE’s position as your source for cutting-edge global business knowledge.

All of these features are added and reworked for the purpose of advancing knowledge of international business for you, our user. globalEDGE is your source for global business knowledge, and we invite you to use our new sections, submit feedback on the changes, and interact with our blog. We are excited about these improvements and hope you are too. 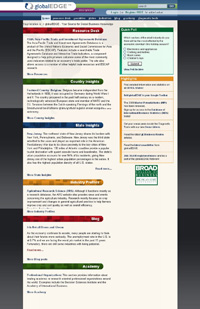 In 2011, the globalEDGE team embarked on a full site redesign to increase the interactivity and usability of the entire website. Building on the popularity and success of the countries, states, and industries section, the next generation of globalEDGE includes a similar section on trade blocs. In addition to the statistics, indices, and trade information that globalEDGE users have come to count on, these sections now include additional maps, interactive rankings, and easier-to-use resources pages.

We are also excited to bring a greater focus on social media and connectivity to the latest version of globalEDGE with numerous RSS feeds, opportunities to connect with globalEDGE via LinkedIn and Facebook, and to follow us on Twitter and by reading our blog. All of these features are added and reworked for the purpose of advancing knowledge of international business for you, our user. globalEDGE is your source for global business knowledge, and we invite you to use our new sections, submit feedback on the changes, and interact with us. We are excited about these improvements and hope you are too. 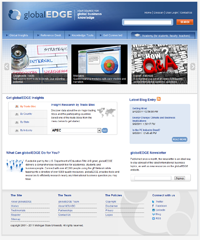 In 2017, globalEDGE received a full redesign intended to make the site more mobile friendly and compatible with today’s devices and browsers. The redesign also ushered in a new aesthetic, as well as significant enhancements to flagship pages like Country Statistics, Country Trade Statistics, and Country Indices. The homepage has been optimized to provide access to content in more direct and efficient means. Many social media features have been improved to create a more interactive environment for users.